What is TikTok and why is it so popular?

Back in 2016, TikTok would have been the incorrect way to spell the noise of a clock, fast forward six years and it is now the third biggest social network globally, falling just behind Facebook and Instagram.

In 2021, TikTok reached an impressive 656 million downloads, which is 100 million more downloads than the runner up, Instagram. TikTok announced earlier this year that it had reached three billion downloads worldwide.

The origin of TikTok

TikTok was first launched in China as a project called Douyin, which is still the Chinese name of the app. TikTok then relaunched in its current format in 2018 and grew to one billion active monthly users by the start of 2021.

Until recently, TikTok users were limited to 60 seconds for their videos. But in July 2021, TikTok began giving users the option of uploading videos up to three minutes in length and then at the start of this year, users are now able to upload 10 minutes.

How does TikTok work?

TikTok’s success is mainly due to its incredibly impressive algorithm, but how TikTok works can be a little confusing if you are using it for the first time.

Once inside the app, it is divided into two main feeds: the For You Page and your following feed. Your following feed is made up of people you have chosen to follow and the FYP acts like an individual landing page for users that showcase curated videos that TikTok thinks they might watch or like.

Some basic gestures you should know if you are new to the app:

How does the TikTok algorithm work?

According to TikTok: “The system recommends content by ranking videos based on a combination of factors — starting from interests you express as a new user and adjusting for things you indicate you’re not interested in, too.”

Various factors can influence the TikTok algorithm including:

So, why is it so popular?

TikTok has many reasons why it is so popular, but we have rounded up the top five for you below:

Those of us that work in the social world will know that when it comes to Twitter, Innocent Drinks take the crown for the best content.

Innocent Drinks are known for their funny and quick remarks across social media – they have created a firm brand personality of being a British millennial.

Back in 2017 as their social media began to take off, instead of posting instagramable pumpkins like many other brands would, Innocent posted the below image: 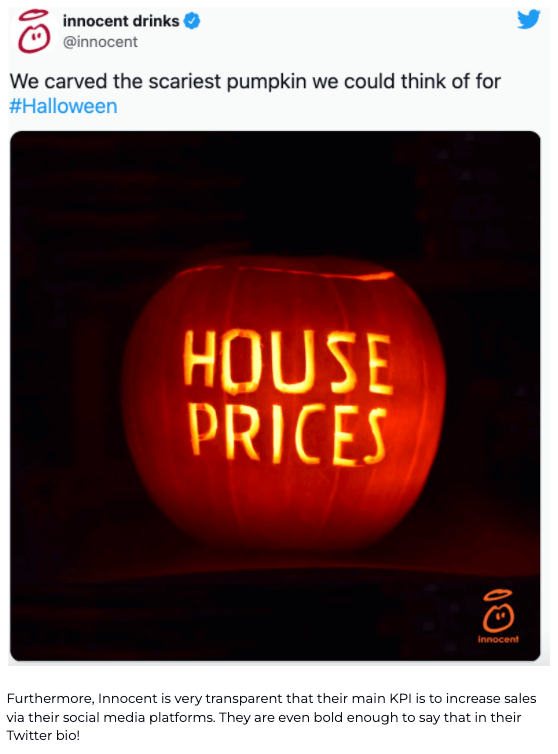 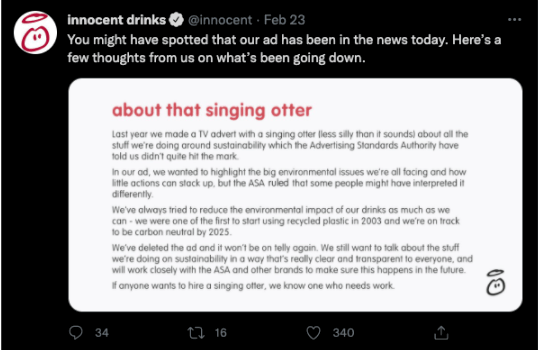 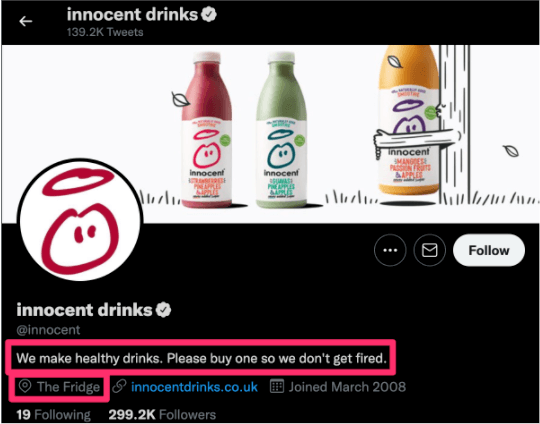 When it comes to TikTok, there isn’t a firm favourite just yet, but RyanAir is getting it right every step of the way.

During the pandemic, RyanAir took to TikTok and jumped on all of the current trends which caused them to grow rapidly. As of today, RyanAir has 1.6 million followers, 46.8 million total likes and the hashtag #RyanAir has 641.6 million views total.

One of their most popular content pieces was a video using trending audio at the time asking every brand that has TikTok to comment for no reason. Comments ranged from TikTok themselves, Duolingo, Microsoft UK, Aldi UK and Heinz UK. Within the comments section, brands were commenting funny one-liners sparking conversations amongst themselves. 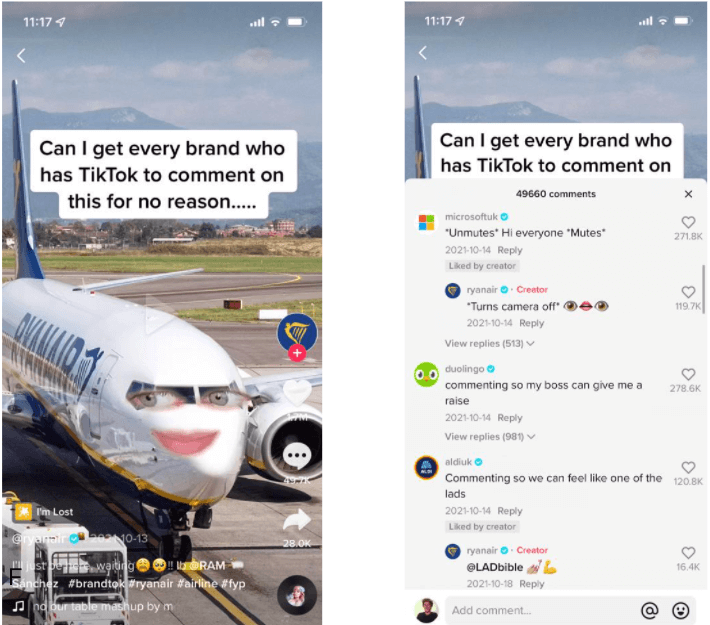 If you are looking for more TikTok inspiration, check out Russ’ article on four business brands on TikTok to take inspiration from.

If you’ve been online at all in the past week you will have seen the debate that divided the internet, are there more wheels or doors in the world?

This debate originally sparked on Twitter from @NewYorkNixon following a conversation amongst friends but quickly grew across other platforms including TikTok. On TikTok, hashtags for "wheels vs. doors" and "doors vs. wheels" have 148 million views combined. Users went viral for filming themselves listing reasons for their argument of #TeamDoors or #TeamWheels. This debate was spoken about on James Cordon’s The Late Late Show, TalkSport radio and This Morning showing just how a social trend can spread so quickly.

Out of curiosity, are you #TeamWheels or #TeamDoors? The overall majority at Selesti decided #TeamWheels but a few of the team did give good arguments for #TeamDoors and stuck to their guns!

We’re confident that TikTok is going to continue growing at this rapid pace and become a platform that stands out from its competitors. If you need any further support with your TikTok strategy, get in touch with our social media team for some direction and support.

4 business brands on TikTok to take inspiration from

As TikTok continues to grow at a rapid pace, understand the origin of TikTok

Find out why there's more to love than hate about TikTok.